All the planning, crafting and 57 lb suitcase carrying paid off during my best friend’s bridal shower. The party turned out better than we could have ever expected.

We hosted the shower at a local restaurant. It was a private setting and the staff was super to attentive to us the entire time – through set-up, during the event, and after it was over.  The layout was ideal, too.

Instead of spending money on decorations that would simply be tossed out after the event, or buying a gift from the registry, I decided to work/shop with a dual purpose in mind: make or purchase items that Diana could use for the wedding or in her future home.  Luckily, their house colors will be the same as the wedding colors!  We were also able to reuse a good chunk of the decor we bought for the bachelorette party. 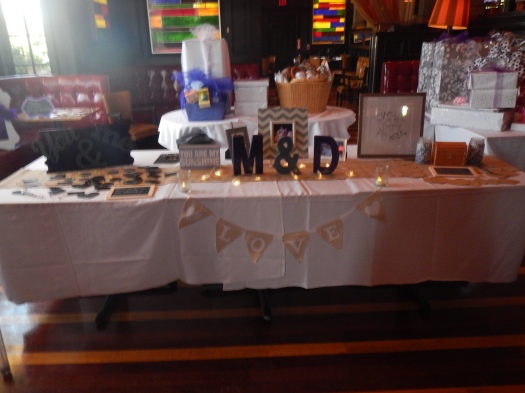 For the “What do you love most about our bride?” activity, we asked the groom to share five things he loves most about his bride-to-be (written on the black hearts).  Then each bridesmaid, along with the mother-of-the-bride and future mother-in-law, wrote one thing they love most about her.  Blank cards were available for guests to share their thoughts as well.

Each guest was asked to share a bit of love advice for the soon-to-be newlywed couple.  Then, each week during the first year of their marriage, Matt and Di will be tasked with opening up one heart, reading the advice, and making it a point to abide by whatever that particular message guides them to do.

The bottom of the gift table was lined with pictures of Di’s early years (and boy were there some gems in the collection!).

One of the bridesmaid put together this incredible wedding dress cupcake compilation.  Looks like something a culinary professional designed (with a heavy price tag).  She did such an amazing job on it.

Some of the bridesmaids put together these awesome centerpieces as well.  The faux flowers were laid on a bed of diamonds and illuminated by a changing color light. 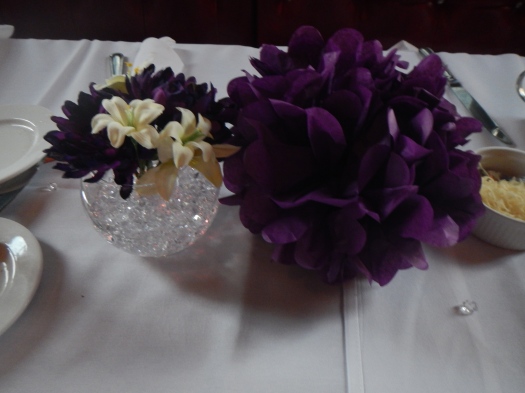 We brought back props from the bachelorette and set-up a photo booth that was put to good use.  The frame was a fun addition, but also something the couple will be able to use in their new home.

We kicked the party off with an ice breaker. Each guest was handed a card with a name on it – 1/2 of a famous couple.  They were tasked with finding their soulmate.  Of course, Matt and Diana cards were included!

While everyone was eating, we played a round of bridal trivia.  Tables were broken up into teams of five and everyone had to compete in the categories of wedding songs, wedding movies and general wedding knowledge.  Ironically enough, it came down to a tie between the Mother-of-the-Bride and the future Mother-in-Law.  They had to duke it out over tie breaker Q’s about their son and daughter.  In the end, the MIL team brought home the prize.

Next up was the “Nearly Wed” game.  In advance of the party, we asked Matt to answer a few questions and then Diana had to guess his responses.  For each one wrong, the poor girl with lock jaw had to put another stick of bubble gum in her mouth (I’m a horrible friend).  Luckily she knows him pretty well after 10+ years!  We gave guests a copy of the questions so that they could play along, too.

The ladies also played a bridal scratch off and two lucky winners got to bring home a prize.  While the bride-to-be opened up gifts, guests had to follow along and mark off items from the gift registry Diana received that matched up to their cards.  The first two winners scored a Bath & Body Works candle.  Gift bows were handled off to one of Di’s ridiculously talented friends, who created this masterpiece (the groom even got in on the action):

It was absolutely amazing day celebrating an even more amazing person. Can’t wait until we get to stand by this girl’s side! 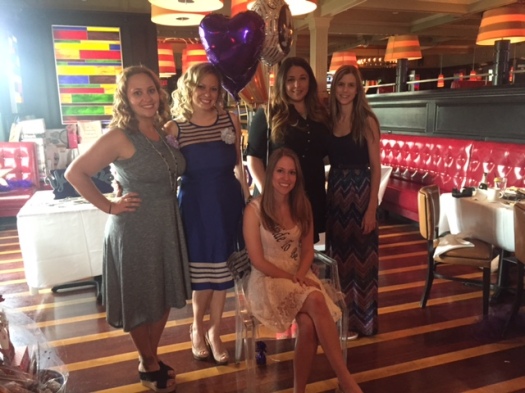